It’s very rare, but occasionally I will come across a swap so insanely built that I am awestruck. This is certainly such an occasion.

Mazda released the first generation FB-Series Rx-7 in the States in 1978. The Rx7 always had a unique rotary engine. The FB had a 12a, which was a 1.2 liter and had 100 horsepower with 100 ft-lbs of torque. By 1984, the car had grown into a version called a GSL-SE. It had a 13b engine, which was fuel injected, 1.3 liters in size, and had 135 horsepower with 133 ft-lbs of torque. At only 2,400 lbs, these things were pretty peppy. I owned one in high school. Mine got pretty bad gas mileage, and the steering (which is a recirculating ball design) was pretty bad. But I remember when Car & Driver magazine did a write-up on the SE version, and they something about “entire city blocks can be covered sideways.” Well, maybe if you are a Car & Driver editor, and not a pimply teenage dude with an 89k mile example with worn out steering. I introduced mine to a ditch or two trying to prove that statement. 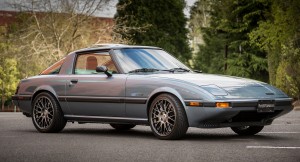 Doing a high quality swap in a nice shop when you have lots of money and the best tools and just buying all the parts you need is one thing. But when you see something ultra-fine and it’s apparent that it was all done by hand… awesome.

There are so many little handmade touches. Like the strut tower brace, a hydraulic engine damper, little perfect gussets on the intake manifold. Electronic cruise control on a swap car? Why not. The entire front and rear brake system were transposed from an Evo 8. That kind of crap takes forever to fabricate and install and troubleshoot. And yes, those are Enkei Bortex F17 rims (17×7 front, 17×8 rear).

I don’t know who built this thing, but wow. Kudos. This was posted on Radium Engineering’s website. 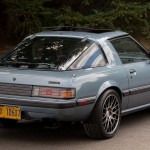 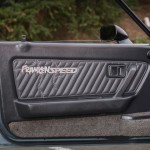 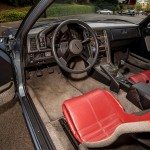 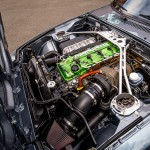