Unique cars are a good thing. I’ve found that souping up an old(er) car won’t necessarily get you around a track quicker than a more modern car. Add to that the fact that it’s rarely more cost effective, and you have a recipe for cookie-cutter, OEM sports cars.

But…
a) If you’re a real car guy, you can’t help but tinker, so you will almost always modify whatever you’re driving, whether by a lot or by a little.
b) Stock is boring. Why not mix a little drama in there? Yes, the feeling of satisfaction you get when you snap off perfect shifts right at redline with a machine that is operating perfectly and just as intended by it’s original design engineers is GREAT. But it feels EVEN BETTER if the same thing happens with something you built with your own hands. Or at least that’s how I feel. 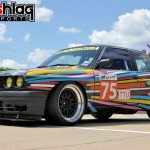 Buying an ass-kicker like Vorshlag’s LS1 E30 isn’t exactly the same thing. After all, you’re buying it as opposed to building it. But still, not many other people will have something like this, and for sure you will end up working on it, repairing it, and hopefully improving it.

The boys at Vorshlag are well-known for their BMW exploits. In this case, they wanted to fabricate a car with which they compete in the GrassRoots Motorsports Challenge. They claim they ended up spending close to $30k building this thing (including approximately 1000 man-hours), but officially the limit for the GMC was $2011. They spent several years getting this thing to it’s current state.

The LS1 engine is mostly stock, and probably running around 330 bhp. It’s combined with a T5 transmission, which is kind of weak but maybe one of the few options to fit in an E30? The T5 has a scattershield, and a Z06 clutch and pressure plate. They worked their usual magic on the suspension. Note that even before the complete rework, this thing won the GMC with the cheap suspension. Vorshlag is no joke when it comes to suspension tuning. They went to a dual-ear E36 diff cover to reinforce the rear. M3 brakes with race pads, PC680 battery, -6 AN fuel lines with Walbro fuel pump, lightweight E30 body components, flared fenders, gigantic 18×11 wheels, custom interior. Yeah, cool as hell.

With 330 hp and at 2,534 lbs this thing knows how to tango. I could live without the crazy ass graphics, goodness knows you wouldn’t be able to drive this thing down the road without every copy noticing you. 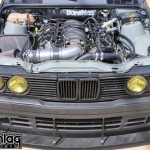 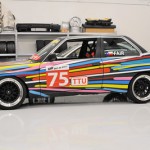 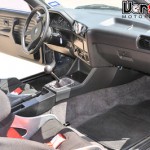 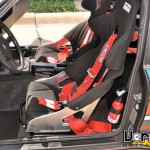