Fox-body Mustangs were enormously popular in the 80’s and 90’s. It seemed like everybody in my high school either had a Mustang or wanted one. They are far from perfect cars, with several known design flaws and issues, but they are a ton of fun.

The 5.0L v8 of this era put out around 225 hp. Compare that to about 420 hp for modern Mustang GT’s, and we begin to realize some progress has been made. The 89 GT was quoted in Motor Trend as doing 0-60 mph in about 6.2 secs, with a 14.8 sec quarter mile. Many of the Mustang aficionados will grumble about those numbers, saying these cars are super easy to modify for several dozen more horsepower. But don’t shoot the messenger!

The 5.0L is very torquey and easy to drive, making these cars great to play around with as a daily driver. The interiors are nothing special, but have a unique vintage look so having a clean example makes it cool.

Speaking of clean examples, Ebay has this clean one with only a few minor blemishes. With a current bid of $5,550, it would be an awesome car to go play around in. 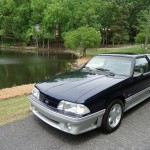 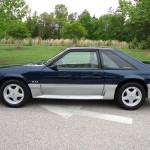 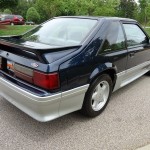 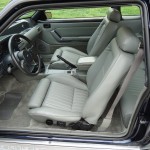 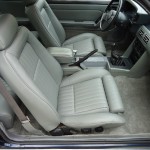 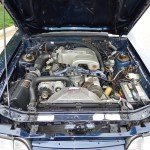 According to the seller:

This is a 1989 Mustang GT 5.0. 25th Anniversary. 5.0L V8 with 5 speed. There are about 105,000 original miles on the car. The car is Deep Shadow blue with the titanium gray bottom. The car is all stock except for the cat-back Magnaflow exhaust, drop in K&N air filter and rear end gear ratio(3.73). The other things that have been changed/upgraded are the LX tail lights and clear 6 piece headlight set. The car has been completely repainted about 3 years ago. This car has had a lot of freshening up done to it in the past 3 years (listed below). This car has had almost a completely new interior in it too. It runs and drives fantastic! Car has power windows, power locks, power mirrors and factory sunroof. The A/C has been converted to R134. It is charged and COLD! This Mustang has a set of original Ford factory Pony wheels that are in great shape. The front tires are brand new and rear tires are about new with 85% tread remaining. I will attempt to give an accurate as possible condition of this car as the car does have some minor flaws. There is a ding/chipped paint on edge of hood (something fell out of hands when walking by the car in the garage), passenger side lower ground skirt has chip and has been touched up though, rear hatch has small raised bump spot and at some point in the past someone broke in through the hatch and when car was repainted they never fixed the under side where the lock retainer clip is. You can’t see it unless the hatch is open and are looking for it, it doesn’t effect the operation or function of hatch or lock at all. Passenger side black trim has some small chips in it and the factory radio doesn’t light up very good anymore. All these noted issues are pictured below so you can see for yourself what I’m referring to. These cars are becoming extremely rare and this is one really nice all around car. Thanks for your looking and good luck bidding!