I found this car on the VWVortex forum. It looks like it has already sold, which isn’t surprising given it’s condition.

1988 Vw Scirocco 16v with only 72k original miles, 5spd, am/fm/cass, a/c, pwr window, pwr doorlock, sunroof, everything in perfect condition. A true collector. No dings, scratches, accidents, or repaints. Showroom condition, garaged since day 1, ” BBS Wheels are not included “. Asking $7,500. Factory bumpers and wheels will be provided. Yes, it’s been stored in LA California and not driven, and it’s taken up the space in my garage. I have got way too many cars and I need to free up some space.

The word Scirocco comes from a wind that comes across the Saharan desert and reaches near-hurricane force speeds in Southern Europe. The 1st generation went on sale in N America in 1975. The 2nd generation went from 1982-1988, but I don’t think it was sold here in the states that long. It wasn’t until 1986 that the 16-valve model was produced. Like the Golf GTI version and the Jetta GLI version, the 16-valve was a sportier, souped-up version of the regular car. Most importantly, output of the 1.8 liter four-cylinder went from 90hp to 123hp. The car also got a full body skirt, larger rear spoiler, and the famous tear-drop wheels.

For a year or two, I drove a 1986 VW Golf. It was a burgundy car, a 5 speed with 4 doors. I’ve found that people tend to memorize the dash/gauge layout in cars they own. The photo of the Scirocco gauges brings that all back like it was just yesterday. 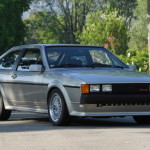 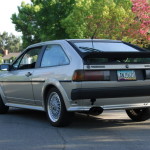 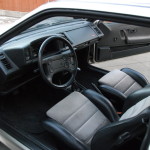 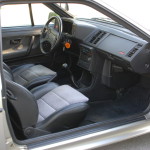 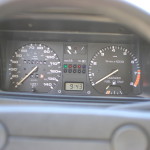 I started out my autocross “career” in a 16v Scirocco. The engine was a real delight, really coming alive in the upper rev-ranges, with good pulling power down low. The chassis was well-balanced, and could be easily coaxed into rotating with the right inputs. I specifically remember spinning the car in a run where the rear end came around too quickly to save. I also remember myself and two other guys being in a Scirocco on a back road at night, and daring the driver to try and hit 100 mph before a sharp curve at the end of a straight. He did, and then some. They would do 0-60 mph in about 8 secs, pretty snappy for a car of this vintage. Top speed was around 124 mph. In a 2300 lb car, the 10.1″ front disc brakes were considered gigantic, and the 5 speed tranny was a joy.

Did I mention that cool looking unique spoiler on the back hatch that was positioned about 2/3’s of the way down?

Cruising at 80mph on a highway back in the 80’s (when the double-nickle speed limit was enforced) was pretty rare. so these cars are a little noisy and uncomfortable these days. But relatively speaking, they were a real wonder-kid in the 80’s. And they are basically impossible to find these days in good, unmolested condition.